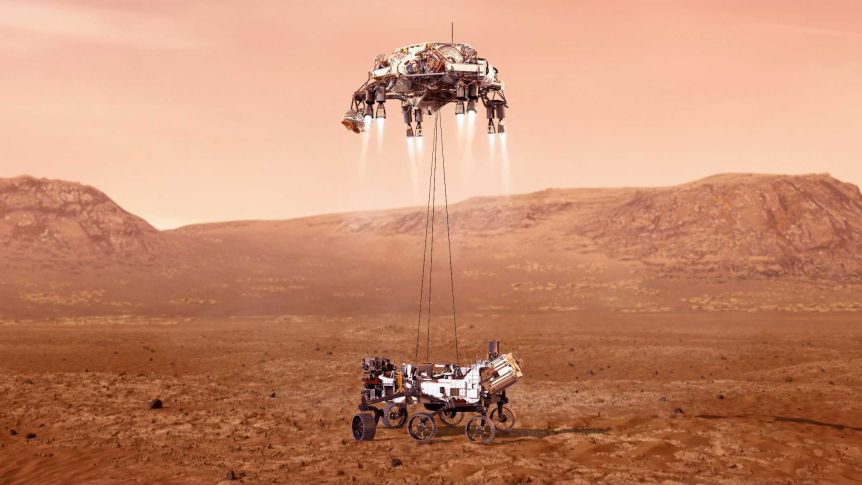 On Thursday, the 18th of March, at 2:55 PM Central, NASA successfully landed the fifth ever rover on Mars. Its name is Perseverance. The rover was launched last July, and has since traveled around 300 million miles, and just last Thursday, it successfully landed, sending this photo to Earth just a few minutes later.

The rover was built at NASA and has been in the works for years. The trickiest bit of getting something to mars is the takeoff and landing. The takeoff was successful, and the journey worked just as planned. The final bit was getting it to land in the Jezero Crater on Mars. The rover was equipped with a flying drone-like machine to photograph it and its landing. In the next few days, more video of the landing will be received here on Earth. To follow the coming updates, you can follow the rover’s Twitter page where updates are posted all the time.

The main goal of this rover is to leave test tubes with samples of mars rock on the red planet for future rovers to collect and fly back to Earth later. It will also send hundreds of photos here for scientists to study in order to learn more about Mars and its climate. This is a huge milestone for space travel, with the first-ever succesful flight on another planet.

It is times like these that remind me that we are not too far from colonizing the solar system. Although no human has ever been to Mars yet, it is known that whoever will be the first there is most likely already born. I am so excited to see what else NASA has in store for us, and until then, I can only dream of an eventual Mars base with humans living there permentantly.