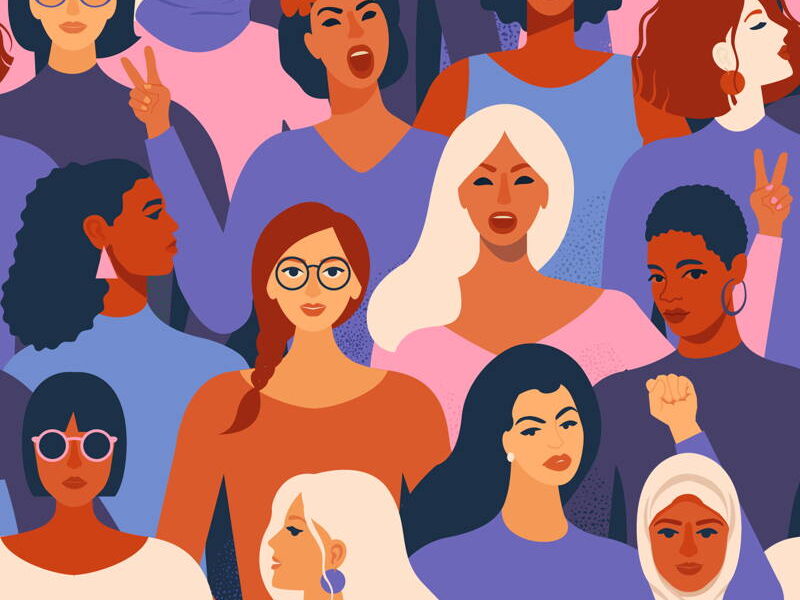 When you google Feminism, the definition provided is, “the advocacy of women’s rights on the basis of the equality of the sexes.” But if you were to ask people how they define feminism, you would get a variety of responses due to the controversiality of the word and how the meaning has been perceived and misunderstood. Some responses could include, “feminism is women fighting for dominance and superiority over men,” or “feminism is women playing the victim,” or even “feminism is man hating.” These responses have been perceived partly from all the flaws within the feminist movements and partly from the impact of society and social media that misundertsands or construirs the meaning. At heart, feminism does mean believing that men and women should be equal, but there have been many different approaches to this belief and various opinions that have resulted in different connotations of the word.

There are 3 types of feminism that have evolved throughout the years.

Moreover, these branches of feminism have somewhat been merged into the public view of what feminism is. When someone thinks of feminism, they may think of all these branches combined and there is less differentiation between them in current society, for they all fall under the general umbrella of feminists and the way women fight against oppression; whether it be constitutionally, culturally, or economically. But again, though these are the roots of feminism, there is still much controversy within society due to people believing the words of a few, that don’t speak for the many. A few feminists may say they hate all men, but that has nothing to do with feminism, that has to do with their life experience and opinions of men. Plus, just because this is what a few believe, doesn’t mean it is a fundamental belief of ALL feminists. One of the biggest misconceptions about feminism is that it’s a movement for women, by women, and made up of women in opposition of men. While there are reasonable concerns about feminism, including ways feminism has failed to be intersectional and meet the needs of people of color, trans and gender non-conforming people, feminism is based on equality not superiority.

Here are some of other misconceptions about feminism and the truth of the situation.

Many believe women have already achieved equality because we can vote, say and dress how we want, have the same access to jobs and education, and feminists are just being picky and not enjoying the freedoms we already have. While women have come a long way from our early primary roles of housewives and babymakers, we are not yet equal and there is still progress to be made. In the workplace, women have to talk even louder to get their voices heard. If men talk loud and demonstrate confidence, they are assertive, but if women behave the same way, they are bossy. In public, women get catcalled because men automatically sexualixe them and view them as sexual objects rather than people. These things make a difference. When acknowledging these current and frequent acts against women, women are in no way saying they don’t appreciate the progress made in the past, they are just saying that sexism is not dead and it still hurtfully impacts women today.

“Women may have a few obstacles that men don’t, but feminism actually insults women by acting like they’re not able to overcome those obstacles. It encourages women to be sensitive and thin-skinned instead of being tough and going after their goals. Women don’t need feminism. We’re strong enough to succeed on our own.” It’s true that some women are capable of overcoming every obstacle that sexism puts in their way. There are women heading up corporations, pioneering scientific discoveries, and we have a female vice president. But the strength of these women, while I admire and celebrate it, shows off a part of the problem. Women can achieve just about every success men can, but they have to be stronger, tougher, and usually more qualified than their male counterparts. They need to be thick-skinned enough to shrug off harassment. They need to walk a fine line of being assertive without being judged “bossy” or “bitchy.” Feminism doesn’t say women are weak: it just says that in order for women to succeed in any field, they have to be much stronger than the men.

“Feminism is for women who want careers, who don’t like makeup and shopping, who want to be the boss in their relationships. Women who like being homemakers, being traditionally feminine, and having their partners take the lead don’t need feminism – and feminism often looks down on those women.” Femmephobia is that attitude that anything associated with women is inferior. People all over the gender and political spectrums can fall into femmephobia. Sometimes feminists do a good job of questioning why “girl stuff” is considered less valuable and worthwhile, and sometimes they fall into the trap of looking down on it. What’s important to most feminists is not steering clear of traditional femininity, it’s getting rid of the assumption that women should be feminine and men should be masculine. Feminism isn’t about flipping the script of gender roles, where women are powerful and in charge and men are submissive. Feminism is about increasing the freedom we all have, to find the roles that fit us best.

These very common misconceptions are the very reason why if you ask someone if they are a feminists or if they believe in feminism, they view it negatively, due to their negative perspective of feminism they have perceived from the media or society. Women aren’t weak or victims. Women are strong, powerful, smart, talented, and capable of anything. Feminism only seeks to create a world where women are in every way given the same treatment, same opportunities, same pay, etc. Feminism has never been about complaining or seeking superiority over men, but continuing to acknowledge the differences between genders so we can continue to progress until there aren’t any. So everyone can choose who they are, their jobs, their style, their interests, their passions without patriarchal and heteronormative norms luring over them telling them to be masculine or feminine; without conforming to fit into the box society has made for you.