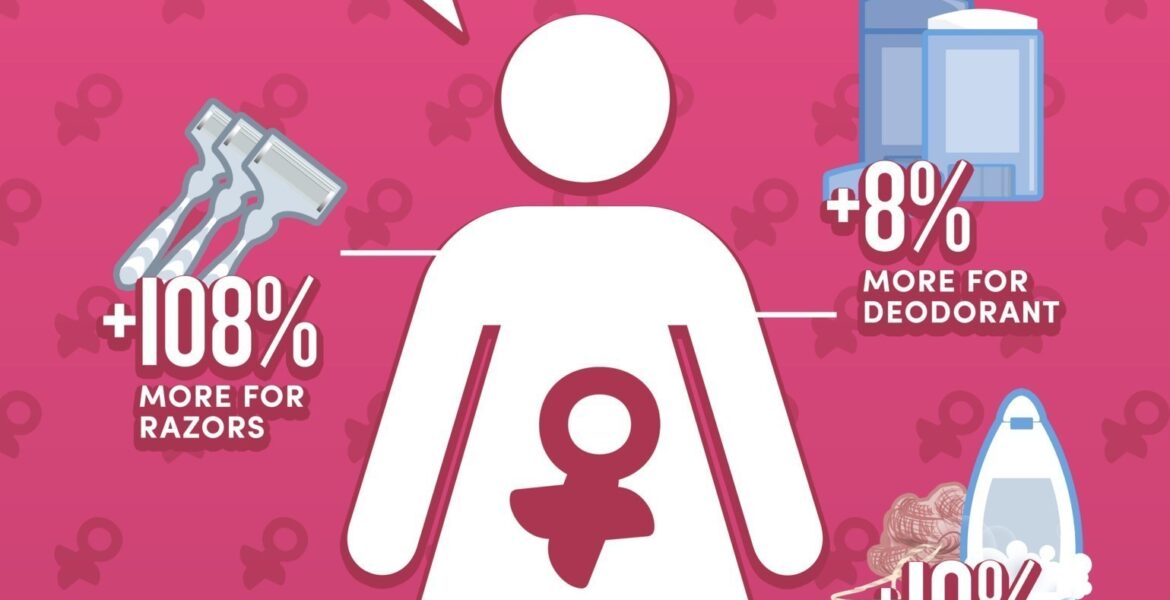 Are you a woman or identify as one? Do you buy products marketed towards women rather than men, like toiletries, clothes, and accessories? Are you aware of the significant price difference in “men’s” and “women’s” products? This price difference is known as the Pink Tax, and just like the name suggests, it refers to the price difference between men’s products and women’s products that are virtually identical. A whopping 7% of the time, women are paying more than men for things like children’s toys, clothing, personal care products, and senior/home health care products. That may not seem like a lot, but if you consistently buy women’s products, the costs begin to stack up. So pretty much what you’re paying extra for is the pigmentation and the word “woman” slapped on the front.

Consumer Reports found that in comparing common drugstore items, “products directed at women- through packaging, description, or name- might cost up to 50% more than similar products for men”. In fact, more often than not, women are paying more for personal hygiene products than men. Another example found by the New York City Department of Consumer Affairs is when they examined 400 products for sale by New York City retailers, women’s products were more than twice as likely to be priced higher than men’s. Mens were more expensive than women’s 18% of the time, and they were about equal 40% of the time.

So why does this happen? Well it could be not so subtle sexism, which is the conclusion lots of people jump to, or it could be a number of other things. Tariffs, the tax on imported goods, could explain something, if taxes are being put on women’s goods more often than men’s. Product differentiation is when sellers frequently distinguish a product from others, to make it more attractive to a certain market, according to jec.senate.gov. So if a manufacturer makes a smaller number of pink razors, as opposed to a large amount of blue ones, then the pink ones need to sell for a higher price to churn a profit. Another explanation could be price discrimination. This is the act of charging customers different prices for the same goods. If a seller finds that a woman is more likely to pay more for a particular product, then that seller will mark the price up. So the true evil here is capitalism.

So what can you do to avoid paying more money? Well, you can always just buy the men’s products, at least when you can. Steps are being taken in some states to make gender based pricing illegal, and some states, including New York, Illinois, Connecticut, and others do not impose a tax on feminine hygiene products. Just be aware of what you are buying, and always check to see if you are paying more for something that you shouldn’t.

*Author’s Note- I often had to generalize “men’s” and “women’s” products in this article, but just know that I think the fact we have gendered products at all is silly. I also know there aren’t only two genders, so if you don’t fall into the category of “man” or “woman” that is okay and I respect that. If you don’t feel represented by this piece, then I truly apologize, however I am simply stating the facts that there are more products advertised to men and women than the other genders. I also say feminine hygiene products at one point, but just know not only women, or someone who identifies as a woman need to use these products. I simply used that term since that is the official name in the eyes of manufacturers. I think that covers all my bases, and I hope you liked the article.